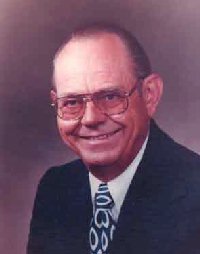 Coach. Before graduating from Shubert High School in 1943, Merle earned All State honors in basketball and football in both junior and senior years.  He took his bachelors degree at Peru State where he was a four letterman in basketball, receiving All Conference recognition three years and selected  N.A.I.A. Division II All American.  Merle’s first coaching job was at Bertrand High School where he coached all sports from 1950-54.  Moving to Tecumseh H. S. he took the head basketball job and assisted in all other sports until 1957 when he moved to Holdrege.  He led the Dusters roundball crew for 12 years.  Under his tuteledge Holdrege had 158 wins 59 losses with a string of 36 consecutive wins, a Class B record at the time.  His teams were State Class B Champions in 1967 and runners-up in 1959.  Giving up the coaching reins in 1969 he took the athletic director job at North Platte until 1988.  Merle received many awards for contributions to Nebraska high school athletics that included the Mike Heck award, and the Outstanding Service to Nebraska High School Athletics from the Nebraska School Activities Association.  Merle has been elected to two more Halls of Fame, the Richardson County Athletic Hall of Fame and the Peru State College Athletic Hall of Fame.  He served as meet director of the early girls state track meets as long as they were held in North Platte.

From the North Platte Telegraph, 2002

Merle Bauer, the man for whom the North Platte High School athletic and track field is named, will be posthumously inducted into the Nebraska High School Sports Hall of Fame next week in Lincoln.

The Hall of Fame honor will recognize Bauer on multiple levels: as an athlete, as a basketball coach and as an athletic director.

For nearly two decades, until his death in 1988 of a heart attack, Bauer had been the athletic director at North Platte High School.

“Merle took an athletic program that was disorganized, limited and mediocre and turned it into one of the finest in the state. Many new programs have been added because he has a strong belief in involving a lot of students,” the superintendent of the North Platte public schools said when Bauer received the athletic director of the year award in 1977.

Bauer has been credited as a key figure in expanding the scope of girls’ sports in North Platte. The girls’ state track meet was held in North Platte for seven years with Bauer directing and coordinating the meet that annually involved about 1,000 athletes from 320 schools in four divisions

For Bauer, who grew up in the village of Shubert in southeastern Nebraska, athletics were always part of his life; coaching always a dream and goal. As a high school junior and again as a senior he was named to All-State honors in both basketball and football and had earned a state-wide reputation in track and baseball.

In 1943, as the United States was embroiled in World War II and as Bauer prepared to graduate, he wrote about his future plans. “My ambition is not decided fully. The ambition of any boy now cannot be fully made with this world at war. Had it not been for the war, I would have liked to be a coach. In coaching there is plenty of work, but it is the kind of work I like.” Bauer wrote just weeks before high school graduation.

Following his military service Bauer enrolled at Peru State College where he was a four-year letterman, received all-conference designation for three of those years and made three consecutive trips to the N.A.I.A. basketball tournament in Kansas City. He was named N.A.I.A. Division II All-American.

Bauer began living his dream of coaching, a career that encompassed 19 years of his life, beginning in Bertrand and Tecumseh. From 1957-69, as head basketball coach in Holdrege, he turned the Class B school into a perennial state power, taking teams to the state tournament six times, winning the Class B championship in 1967. His lifetime record as a coach was 245 wins and 98 defeats.

The finale to his coaching career was as the South coach for the first All-Star state basketball team in 1969 where he coached his team to a 60-45 win. He went on to be director of the Nebraska Coaches Association all-star games for four years while serving as athletic director in North Platte.

When Bauer served as director for the all-star games he wrote in a letter to Nebraska high school coaches:

“We want to encourage each young man who wears a basketball uniform of a Nebraska high school to do his best individually as well as a member of a team. We also want to encourage him to display the kind of sportsmanship and character on and off the court that will make him an ALL star.”

When he died in 1988, the newspaper in Holdrege where he had coached for so many years, wrote that Bauer had maintained throughout his life what he had emphasized to young athletes.

“Merle Bauer will be remembered as a gentleman and fine teacher. Soft-spoken, he was one who let his actions speak louder than words. Most of all, Mr. Bauer had the common sense and ability to get along with people on and off the court. He was a great coach and person.”