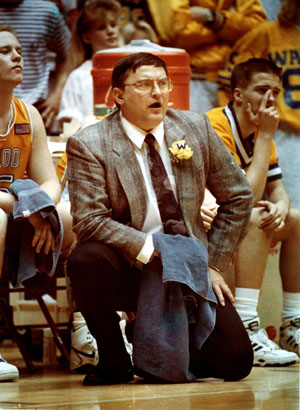 Coach. Superb coaches have a habit of building sporting dynasties. Such a skilled individual is Mick Anderson. His career began as an assistant coach at Ralston High School, and his move to head basketball coach at Wahoo High School in Saunders County turned out to be a master maneuver. The basketball program, from the organized grade school leagues to the high school varsity, came together, reaping state and even national recognition.  At one stretch in the Anderson era, the blue and gold-clad Warriors won 114 straight games, the Nebraska record, of course, and the third highest in the nation. Wahoo was Class B state champion in boys basketball six times out of eight appearances at state. In one remarkable span of seven years, between 1988 and 1994, Anderson had 177 victories and only 3 losses. It came as no surprise then that he was selected coach of the year during this period by both of the state’s largest newspapers.