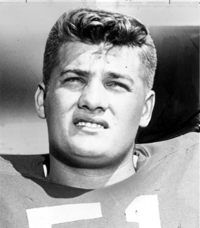 Athlete–When Lexington High School graduated this husky young man in 1958, he had just completed two years as a terrific center on football teams of the Minutemen. In the fall of 1957, for example, they had an undefeated season over almost all Class A opponents ending the year as state champion according to many observers. As a University of Nebraska Cornhusker, he lettered three years between 1959.and 1961, including the great victory in 1959 over Oklahoma. He then played for 17 years in professional football as starting center for the Minnesota Vikings, getting to the Super Bowl four times. Unlike some former football players, Mick Tingelhoff emerged from his great football career without serious injury.