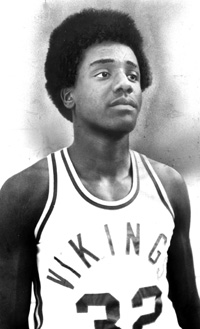 Athlete–Nobody ever looked better on the basketball courts around Omaha North High School than this 1977 graduate. A high-scoring ace from his sophomore days onward, by the time of his senior year he was averaging right at 40 points per game. Three times in high school, he scored 50 or more points in one game. His 916 one-season points and 38.17 per game average rank second in the all-time state high school standings. The only games North High lost in his junior and senior years were those when the prolific McGee fouled out.

Following a great college stint at the University of Michigan, he played professional basketball for nearly a decade, including two years with the championship Los Angeles Lakers.

Long-time Omaha observers say none was tougher to defeat on the hardwood than a healthy Mike McGee.