Athlete–Among the surprising things about this “big guy“, a 1958 graduate from Lexington High School; being six feet three inches tall and topping the scales at two hundred plus, was his agility and scoring skills on the basketball court. In 1958 he was rated of all-state quality, having a record average of seventeen points scored per game for the Minutemen on the hardwood. His special sport was football, and he helped lead Lexington to a Class A number one ranking in the fall of 1957 as an all-state tackle. Later as a well-known college player at NU, he became interested in coaching, and as one of Bob Devaney’s assistants, helped with those national championship teams in the 70’s. Later, Monte Kiffin became a successful head coach at North Carolina State and eventually into a highly-respected defensive coordinator career at Tampa Bay in the NFL.

And members of the 1963 Class A state champion Legion Midget baseball team in Lexington couldn’t wait to remind their old coach, Monte Kiffin, when they held a reunion last weekend.

Kiffin, a Lexington native who was The World-Herald high school athlete of the year in 1958, returned to his hometown to coach the Midget Legion team in 1962 and 1963 as his University of Nebraska football playing career was winding down.

Forty years later, the 63-year-old Kiffin is working under a three-year, $5.1 million contract as defensive coordinator for the Super Bowl champion Tampa Bay Buccaneers. He said he has no thoughts of retirement.

Kiffin’s knack for coaching was apparent during his college days, said one of his former Midget baseball players, Tom Stuckey.

“When we went to Hastings for the state tournament, Monte got one of the Nebraska baseball recruits, Bob Stickels, to throw batting practice before our first state tournament game,” said Stuckey, an Omaha businessman who later lettered while playing baseball for Nebraska.

The 6-foot-6 Stickels, who was from Hastings, threw a 90 mph fastball that carried him from the Huskers to a contract with the Kansas City Athletics organization in 1965.

After he tried to hit Stickels’ pitching, Stuckey said, batting against Blair and Beatrice seemed like a breeze. The Lexington players pounded Blair 15-0 in their opening game and then handed Beatrice its first loss of the season with a 9-6 victory in the championship at Duncan Field.

“Few people know that I helped out with the Nebraska baseball program and was the freshman coach when Stickels and Gary Neibauer were freshmen,” Kiffin said. “We played two freshman games, and we went 2-0. It wasn’t hard to do with Stickels and Neibauer pitching.” The Atlanta Braves selected Neibauer as their second-round draft pick in 1966, and he spent five seasons in the major leagues.

But Kiffin didn’t always depend on having an extra ace up his sleeve when he was coaching, former Midget player Gary White said.

“He was very disciplined and expected a lot out of us,” said White, who played center field. “We were in shape. We ran a lot. And when he talked, everybody listened. There was no ranting from him. He had everybody’s respect.”

Kiffin, who was an NU assistant coach when Nebraska won back-to-back national titles in 1970 and 1971, had an opportunity to compete for his first NFL head coaching job last winter when the San Francisco 49ers called him after Tampa Bay’s Super Bowl victory over Oakland.

“I had the flight to San Francisco all scheduled for a 4:30 p.m. on a Thursday,” Kiffin said. “But the Glazers (team owners) and Jon Gruden (head coach) called and got involved.

“I thought about it. San Francisco had its offense all in place. They just needed some help on defense. But there were some other issues, and I stayed because Tampa Bay is a great place. It’s great to work for the Glazers and Gruden.”

Winning his first Super Bowl, Kiffin said, is better than he had envisioned. “In talking to our players, it’s a much bigger thing than they had imagined,” he said. “A lot of good coaches and players never got to wear a Super Bowl ring, including Jim Kelly, Bruce Smith, Bud Grant and Marv Levy.”

“We’re not going to sneak up on anybody,” he said. “Philadelphia will be waiting for us.  “Everybody does a thorough study on you during the offseason, and they’re ready. It’s a challenge, and we’ll have to step up.”

TAMPA — As stories about him go, and there are only about a billion of them, this one isn’t the newest. Perhaps it isn’t even the best.
If you are attempting to describe the essence of Monte Kiffin, the method and the madness, it makes for a pretty good start.

With his passion for the game and defensive knowledge, no one gets the Bucs ready to play like Monte Kiffin, left, with cornerback Brian Kelly.

It is quiet at One Buc Place, and the hour is growing late. The only activity is from the four defensive coaches of the Bucs, each watching tapes in their offices. This isn’t unusual. At One Buc, the offensive coaches usually do their heady work in the early mornings, the defensive coaches late into the night.

And so it was this night when, eureka, Kiffin was on to something. Excitedly, he gathered his coaches into one room to describe, in detail, how tweaking the defense just so in a certain situation was certain to vex and confuse that week’s opponent.

Kiffin was whispering the details so quietly no one could hear.

“It was the funniest thing you could imagine,” linebacker coach Joe Barry said. “He’s going, ‘I’ve got it. This is how we beat those guys.’ Only we can’t hear him. It’s like ‘psst, psst, psst.’ I felt like saying, ‘Kif, it isn’t like Andy Reid is in the next room. We’re the only four guys in the building.’ ”

“He’s the guy who held things together,” safety John Lynch said. “I remember sighing in relief when Coach Gruden told me that Monte was going to stay.

“Monte is incredible. I can’t imagine playing for anyone else. He’s passionate. He’s knowledgeable. And he can get you ready to play.”

The numbers back that up. Around the NFL, good defenses rise and fall. Not the Bucs. They’ve been in the top 10 in the league for six consecutive years, the most consistent run in the league. This year, they were first.

Those are only numbers, however. For the Bucs, Kiffin’s value this year was to serve as stability as the Bucs looked for a new coach, who hired a new staff, who signed new players and gave them a new offense. It was Kif, and his defense, that gave the Bucs time for that to happen.

Kiffin won’t hear any of it, of course. He says the reason for the success is Gruden. He doesn’t whisper when he says it. Gruden, however, says the man he wants to grow up to be is Kiffin.

They love the old guy at One Buc. Warren Sapp does a Kiffin impression that leaves them rolling. Dexter Jackson copies his weekly dance. Jackson’s keys? “Be as stiff as possible,” Jackson said.

Part coach, part character. Such is the twin natures of Kiffin, and both are endearing to the players. He’s half John Nash and half Irwin Corey, old Professor Backwards. Except that Kif would be Professor Knock-Them-Backwards.

“I think a lot of people have it wrong with Monte,” general manager Rich McKay said. “They see his energy, and they hear the stories, and they think what makes him good is that he has a screw loose.

“That’s not Monte. The thing that makes Monte is the attention to detail. He’s unreal. He doesn’t miss anything. And he continues to modify, to tinker with his defense, so it evolves a little each year.”

True. On the other hand, he believes the game should be fun. Besides, the stories are too much fun not to repeat.

Start with the story everyone tells, of Monte’s wild ride. Back when he was the head coach at N.C. State in the early ’80s, Kiffin was trying to stir a little interest in the program. So, during a spring pep rally, he dressed up as the Lone Ranger, had them play William Tell Overture and came charging down the hill atop a white horse. Hi-yo. And furthermore, Silver.

There was the time he vowed to jump out of an airplane. Only it turned out to be a helicopter, and it was hovering about 8 feet above ground.

There was the time an entourage followed him into the ring and, waiting for him there, was Joe Frazier.

There was the time, when he was with the Vikings, he and defensive tackle Keith Millard staged a fistfight on top of a nearby building. It ended when Millard tossed a mannequin, dressed like Kiffin, off the building.

Marinelli has heard t
hem all. The one he likes to tell involves the annual scouting trip to Mobile, Ala.

“Monte’s a gizzard man,” Marinelli said, shaking his head in disgust. “Gizzards. Every year, he stocks up on them. I mean, he brings them home in his carry-on luggage.”

Marinelli looks at you strangely as if to wonder why you cared what creature they originated inside.

The stories fly off the walls. There is the tale of when Kiffin interviewed for a job with the Saints in Jim Mora’s hotel room. The two men talked, and they got more excited, and suddenly, Kiffin was arranging the chairs and end tables in the room in defensive positions. Rumor has it that Kiffin gave a head fake to a recliner.

There are the restaurant stories, where Kif has ordered a meal, then began to diagram plays with the oyster crackers, becoming so obsessed he never got around to eating.

Then there were the skull sessions with Gruden. Kiffin has a place on the beach in St. Petersburg, and Gruden — before he was coach here — used to come home to vacation. The men met once while jogging and spoke. The second time they met, they put on a pot of coffee and started matching plays like Fischer and Spassky.

“I don’t have any hobbies,” Kiffin says, grinning. “I don’t hunt. I don’t fish. I don’t golf. It’s just family and football.”

During the season, Kif has been known to sleep four nights a week at the office, just to save the time going home and back. He pretty much lives there, in that tiny office with the cupcakes squirreled away in the drawers and the pretzels on the shelf. It got so bad that once, last year, fellow coaches hid his blanket and pillow so he would go home.

“I love it,” Kiffin said. “You couldn’t pay me to do anything else.”

Don’t get too carried away with the color of Kiffin, however. Behind all the stories, all the laughter, there is a darned fine football coach.

“He’s a great coach,” Barry said. “I’ve been around him for two years now, and I learn something every day. He’s not just the guy who comes up with the plans and schemes. He’s a great technical coach. He could coach any position on the field.

“No offense to the guys who are being considered as head coaches, but it’s unbelievable to me that Monte’s name is never mentioned. He’d be an outstanding head coach. There isn’t any doubt about it.”

Who knows? Maybe it still happens. Kiffin is 62, but he coaches as if he’ll turn 39 any day. Maybe some owner will tap his shoulder yet. After all, all they need is a comfortable couch, a place to hide his cupcakes and a film projector. 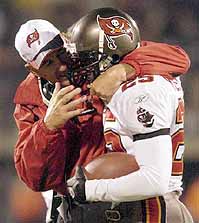