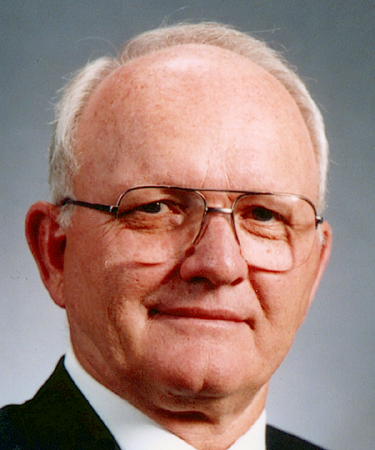 Coach. The only volleyball coach in Lincoln East’s 33 years (2006), Coach O won six state championships (74-77-82-85-86-88), three Class A state runners-up (89-93-94) and made 19 state tournament appearances. He coached more victories in volleyball than any other coach with a 726-367 record. Also head coach of a successful track program from 1973 to 1995. The Lincoln Journal Star Coach of the Year in 1983, Oehlerking was twice named the regional finalist for National Coaches Association Coach of the Year and a Lincoln Ralph Beechner Coach of the Year winner. Coached at Adams for five years and at Lefler Junior High in Lincoln for four years prior to joining the East staff. He is a 1953 graduate of Murdock High School. High school: Murdock. Degrees: Westmar, Nebraska.

When Myron Oehlerking began coaching volleyball at Lincoln East, Richard Nixon was president, Bob Devaney coached the Nebraska football team, the Vietnam War was still going on and a single computer, complete with punch cards, took up an entire room.

The 75-year-old Oehlerking announced he was resigning at the East postseason volleyball banquet Tuesday night. He leaves as the winningest coach in Nebraska high school volleyball history with 793 career wins, including a 25-11 mark this season when he guided the seventh-ranked Spartans to their fourth Class A state tournament appearance in the past five years and their 22nd overall.

In recent years, Oehlerking has had both knees replaced, bypass surgery and a heart valve replaced. As a result, “it’s gotten to the point where it’s become physically difficult to coach,” said Oehlerking, who’s had Mike Wiese as an assistant head coach the past two seasons. “I thought this was a good time to step aside. You don’t want to, but it was something I had to do.”

East athletic director Wendy Henrichs described it “as a tough decision” for Oehlerking to make. “Myron can walk away with a lot of pride and satisfaction about what he’s done with East volleyball,” she said. “His passion not only for volleyball but for kids in general will be missed. I’ve been honored and privileged to be able to work with him.”

Oehlerking has coached volleyball in six different decades. His career began in Adams in 1958, before the Nebraska School Activities Association sanctioned the sport. He not only coached volleyball in his five years there, he also was the football, boys basketball and baseball coach. He was the head girls track coach for 23 years at East, stepping down from that position in 1995 when he also retired as a physical education teacher.

Oehlerking came to Lincoln in 1963 and coached numerous ninth-grade boys sports for nine years. The NSAA added volleyball in 1972, the same year East started its program and handed it over to Oehlerking. The Spartans won their first state title two years later, then added five more in 1977, ’82, ’85, ’86 and ’88. Oehlerking’s best team, however, was one that didn’t win state – the 1994 squad which made an national impact.

The Spartans won the Nike Challenge in Chicago that season and moved to No. 1 in the USA Today national ratings the week leading into the state tournament. Bellevue West, however, upset East in the state finals, leaving the Spartans with a 38-1 record. All six starters on that team, including former Nebraska outside hitter Jaime Krondak, received Division I college volleyball scholarships.

“Myron is one of the main reasons why volleyball is played at such a high level in Nebraska,” said Papillion-La Vista coach JJ Toczek, whose team won its second straight Class A title last weekend. Toczek was an assistant at both Lincoln Northeast and Lincoln Southeast before going to Papillion-La Vista six years ago.

“He’s an icon who will go down as one of the greatest coaches of all-time here,” Toczek added. “I’ve always admired how even-keeled he is and how he connects with kids.”

In a sport that rapidly changes, Oehlerking always stayed ahead of the game in terms of fundamentals and strategy. His Spartans were among the first high school teams in the state to install a fast offense with quick sets in the middle and slide plays to the outside. He was teaching jump serves and finger-tip passes on serve receive long before those skills became fashionable.

But his coaching effectiveness went beyond the physical fundamentals. “I think he embodies the values you want to see in high school athletics,” said Creighton head volleyball coach Kirsten Bernthal-Booth, an all-state setter under Oehlerking in the early 1990s. “Mr. O not only teaches you the sport, he also teaches you life lessons. I felt fortunate to play for him. “I hope my coaching style emulates his because he’s about not only developing athletic talent, but also character.”

The competitive side of Oehlerking was often masked by his steady, calm coaching style. Seeing individual players and the team as a whole performing at their potential was more important to him than wins or losses.

Oehlerking was also all about growing the game. He openly shared his coaching philosophy and strategies to any young coach willing to listen, as Pius X coach Jake Moore learned 20 years ago when he was at Fairmont. “He and Marilyn (Oehlerking’s wife) came down for a camp with Fairmont and McCool Junction, and they were great with the kids,” Moore said. “He talked about all the offenses and defenses they ran, and all of that stuff was new to me at the time.”

Moore came to Lincoln for graduate school after his stint at Fairmont with the intent of leaving the teaching/coaching profession. Oehlerking sought him out to coach one of his Sports Courts club teams during the winter of 1989-90, which then inspired Moore to apply for the vacant Lincoln Pius X job entering the ’90 season. Moore’s Thunderbolts won their third straight Class B state title last weekend and the sixth overall under his 19-year guidance. “If Myron doesn’t call me to coach his club team, I don’t know if I’d be coaching at Pius X right now,” Moore said. “My first few years here, he was my pipeline for coaching information.

“It’s amazing how he’s touched probably thousands of lives through volleyball,” the Pius X coach added. “His legacy is unbelievable.”