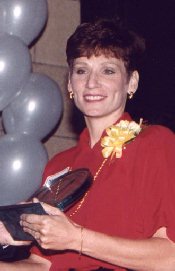 NANCY (KINDIG) MALONE, Athlete–High school athletics for girls in Nebraska was formally revised in the early ‘70s. One of the big stars in the revival was Nancy Kindig, who graduated from Saint Cecilia High School of Hastings in 1977. For four years as a track & field competitor, she led the Blue Hawks to state titles in Class C, contributing efforts in the long jump, hurdles and relays. Her best marks in the long jump (18-11) compare well with today’s girl athletes. Her true grit and determination was a part of St. Cecilia’s 66 straight basketball victories and the 1977 State Championship in Class C. She won gold medals in the hurdles, long jump and relays.

Perhaps the biggest cheers for her came when she was not at her best.  She suffered a broken leg in the relay at the state meet, hobbling but still finishing the race and leading her team to gold.  Later, she returned to the track, after receiving medical attention, and the crowd responded with a standing ovation.

Her track and field prowess earned her a National Junior Olympic team spot and she beat the Russians in the pentathlon in a dual meet between US and Russia all-stars. Later as a University of Nebraska college athlete, she won several Big Eight Conference titles in the heptathlon and pentathlon events.