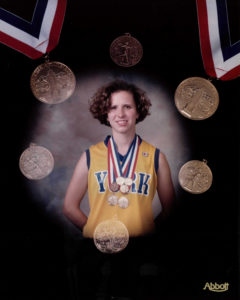 In a 1600 meter race, Nora shepherd set the pace for the pack.  Suffering from asthma, especially on hot and humid days, she emerged as a Junior Olympic Champion, before dominating the 1600, never losing at that distance in high school,  Setting a Class B record as a senior, she also set school records in the 800  and 3200  and swept the Gold Medals in all three State Meet races as a senior.  At the State Cross Country meet, she was a three-time winner, placing third as a sophomore when she suffered an asthma attack and fell during the race.  At UNL, she was a four-year letter winner in track and cross country, running on the Huskers’ school record-setting 4×1500 meter relay team.