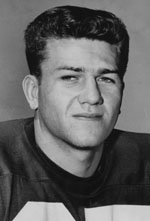 Athlete. Omaha Westside Class of 1957.  The youngest sibling of Nebraska’s most famous athletic family, Pat Fischer was a great high school athlete, gaining football all-state honors in 1956. At Nebraska, his big plays sometimes were the highlights of the season, especially a punt return which beat Penn State, 7-6.

Fischer made his athletic mark in the National Football League, playing 17 years and starting a then record 212 straight games, playing cornerback for the St. Louis Cardinals from 1961 to 1967, and the Wash

Fischer joined the NFL as the 17th-round draft choice of St. Louis in the 1961 NFL Draft. He then signed with Washington as a free agent in 1968. He was a 1969 Pro Bowler. Fischer then helped lead the Redskins to Super Bowl VII in 1972. He finished his 17-year career with 56 interceptions, and ranked seventh all-time in Redskins career interceptions with 27 and fourth all-time with 412 career interception return yards. At the time of his retirement Pat Fischer had played in 213 NFL games, then a record for a cornerback.  During his NFL career,  Pat Fischer was well known to opposing teams as a vicious hitter and a tremendous competitor, despite the reputation as an affable person off the field.

In the late 1980’s, NFL Films named Fischer as the Redskins All-Time Netrulizer sponsored by Tums. After retiring from the Redskins, Fischer worked as a stockbroker and owned a successful real estate business.