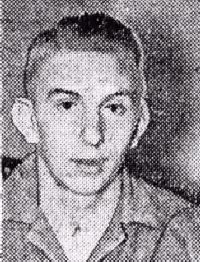 Before graduating from Ainsworth High School in 1939, Ralph had an outstanding career in all three sports offered at that time. His honors included being selected twice to the All State Teams in basketball and once football. His track events were the pole vault and high jump. In order to gain more practice time Ralph built a pole vault pit in his back yard and even taught his sister how to do the vault. Going on to Creighton U. he quickly established himself as a real “Blue Chipper”. Referred to by some sports writers as the “Blonde Bombshell” he led Creighton’s high point chart all four years he played. Ralph was selected to the All American first team in 1942 and 1943. After college Uncle Sam picked up his option and he was assigned to the famed 10th Mountain Infantry Division. He got one more crack at basketball before going overseas by playing for the Army in an AAU tourney in Colorado Springs. The hastily put together team almost won it all playing against top rated AAU teams of the time. Ralph missed the final game when he was called back to his outfit for maneuvers. He saw duty overseas in the battle for Sicily where he was wounded, received the purple heart and went to Fitzsimmons hospital in Denver for recovery. With his recovery complete he signed on with the Denver Nuggets in 1946. Creighton University Hall of Fame in 2000. Died October 1998.