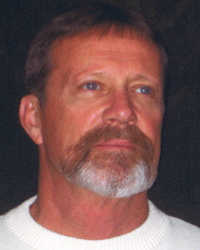 Randy Butts reigned as Nebraska’s premier high school hurdler at the end of the 1960s. The Lincoln Journal-Star’s Athlete of the Year, Butts earned all-state honors in football where, as a running back, he helped the Islanders to a 6-3 record his senior year and a Top Ten ranking. His efforts earned a spot in the Shrine Bowl game. But the hurdles provided his shining moments. Leading Grand Island to back-to-back state championships in 1968 and 1969, he won the all-class gold medals in the 120-yard high hurdles and 180-yard low hurdles his junior and senior years. As a junior, he posted winning times of 14.0 seconds in the high hurdles, and 19.4 seconds in the low hurdles. He also ran on the Islanders’ 880-yard relay team that won the all-class gold medal his junior and senior years and tied for the all-class gold medal his sophomore year. He went on to letter in track at the University of Nebraska in 1970, 1971 and 1972.