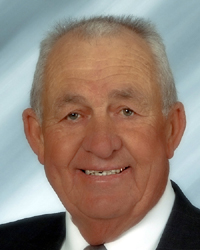 Contributor. Ray Ehlers’ influence on Nebraska high school athletics spanned playing, coaching and administration careers. He was a starter on the unbeaten Syracuse basketball team of 1954, a Golden Anniversary team selected by the Hall of Fame. He played football and basketball at Peru State and coached at Fullerton and Blair before becoming the activities director at Lexington High School in 1970. Over a 29-year career at Lexington that included principal duties and an election to the board of education, Ehlers oversaw one of the most successful high school programs in the state. An organizer and producer of athletic events – Lexington once hosted three district track meets on the same day – Ehlers helped organize the Nebraska School Interscholastic Athletic Administrators Association and served as its president in 1973-74 and was the Athletic Administrator of the Year in 1979. He also served on the Nebraska School Activities Association Board of Control for nine years and is a member of the Hall of Fame Board of Directors.

Before he was here, there were no girls’ sports.  If he could meet any athlete, past of present, he would pick Jackie Robinson for his historically pivotal accomplishments that changed America.  He was the athletic director at LHS for 29 years, and the stadium is named after him.  Soon he will be recognized for all he’s done for athletics in Lexington, and Nebraska.

Ray Ehlers travels to Lincoln to be inducted into the Nebraska High School Sports Hall of Fame Sunday, Sept. 27.  Ehlers will be inducted as a contributor to Nebraska high school athletics, along with 18 others, including Lexington native and standout athlete, Pat Hodges.

Athletes, coaches, officials and contributors are celebrated when inducted in to the Hall of Fame.  Ehlers feels he is good company, and is just happy to be part of the event.

“I feel very fortunate to be considered as one of those going in as a contributor,” he said.

When asked what a contributor is, Ehlers said that he’s been giving that some thought in preparation for the ceremony.  Saturday he’ll walk across a stage to be inducted.  He laughed when he said he’ll have to know by then.

“I guess maybe I’d call it a ‘so-so,’” he said.  “Maybe it’s a person who was a so-so high school athlete, or so-so college athlete, maybe be a so-so official, maybe a so-so school administrator.”

Ehlers is trying to describe himself, though this self-estimation may be a little lower than his resume has shown.

Ehlers was a so-so athlete at Syracuse High School in Syracuse Neb., who started on the undefeated 1954 Class C State Champion basketball team, and who also set the school record in the mile run.

He went on to Peru State College to get an education with majors in industrial education and industrial arts, a major in physical education, and a minor in biology.  He went on to get a MS in administration.  While at Peru State Ehlers was a starter on the football team, on both offense and defense, all four years of his undergrad years, and played basketball three years.

He went on to coach and teach at Fullerton High School from 1958-1968, where he coached track and boys’ basketball.

In 1968 he became the assistant principal and a coach at Blair High School, coaching boys’ basketball and track, and assisting in football.

In 1970 he moved to Lexington as the assistant principal and the athletic director of LHS, a position he held for the next 29 years.

During that time Ray Ehlers, which is the name you will see in large letters if you look at the Lexington High School football and outdoor track stadium, was the “so-so” administrator that he speaks of.  The one who helped organize the Nebraska School Interscholastic Athletic Administrators Association (NSIAAA) of which he was the president from 1973-1974.

The NSIAAA nominated Ehlers, who is 72, for induction to the Hall of Fame this year.

While Ehlers was in office, the athletic program expanded to include females, and added such sports as soccer, golf and tennis.

Ehlers established the first weight room at Lexington High, and has seen that program grow exponentially over the years.  He helped initiate the first fall sports conditioning program.

Outside of the high school Ehlers did a lot of work organizing the middle school athletic program, and was involved in American Legion Baseball, and served as president of the Lexington baseball association for several years.

In 1978 Ehlers was selected at the Nebraska high school athletic director of the year.

Over the years Ehlers traveled to several national conventions, and presented at least six of them.  In 1995 the National Coaches Association selected him as the National Athletic Director of the year.

Ehlers served on the board of control of the NSAA for nine years, where he worked very hard to convey the importance and value of high school athletics, and fought for the initiation of girls’ high school sports.

He also served as meet director to many track meets, including three different district track meets in one day on one occasion.

That’s where the “so-so” comes from.

He is a modest inductee of the Nebraska High School Sports Hall of Fame.  The Hall of Fame he helped organize, of which he was on the board of directors of since 1996.

“There is no way I can compare to these guys,” he said of the athletes who will be part of the 2009 class of inductees into the Hall.  “Like Pat Hodges.  I saw that guy compete.  I know what kind of an athlete he is.  He did everything in high school.”

Ehlers is grateful to be inducted, and gives credit to others for his accomplishments.  “It’s probably only because of some of the great people I have had the privilege of knowing, the great people, the great coaches, that I am able to have the opportunity to walk across the stage.  I am humbled by being there.  I’m not great,” he laughed.  “I’m just a so-so that’s coming along.”

He also said it isn’t the end.  “As long as I’m here I’m going to work very hard to get young people involved in athletics, I believe so strongly in them.  They teach life.  That’s what it all is.  It’s life.  There are so many little things.  Athletics are not there, necessarily, for the purpose of giving a college scholarship.  It’s to teach kids how to carry on a meaningful life, and to be useful citizens, through high school activities.  I believe in that so strongly.  Why do I believe that?  Because of how I got started.”

He said he was lucky to have two parents who saw that high school athletics could do some good for their son, Ray, and allowed him to get involved.

He remembers back then when just getting involved.  He started in the second football game he ever saw in his life.  His father told him, after convincing his mother that football would be okay for their child, that there would be a lot tougher things in life than out on a football field.

Friday night, just before the National Anthem is played before kickoff at the Lexington High School football game against Gering at home, Ehlers will be honored for his induction into the Nebraska High School Sports Hall of Fame.