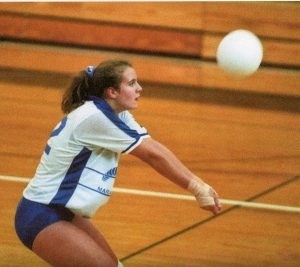 Omaha Marian (Class of 1995)
Renee Saunders kept her eye on the ball. Named all-class all-state in volleyball and basketball her junior and senior seasons, she led Omaha Marian to the state basketball tournament every year and a state runner-up finish her junior year. She graduated as Marian’s all-time leader in scoring and rebounding. On the volleyball court, she garnered All-American honors, logging 335 kills as a senior. She also lettered in softball and track and field at Marian and was the consensus athlete of the year by The Omaha World Herald and The Lincoln Journal Star her senior season. Saunders went on to play basketball and volleyball at the University of Nebraska. Though her basketball career was short, she was a major contributor for the Husker volleyball team.