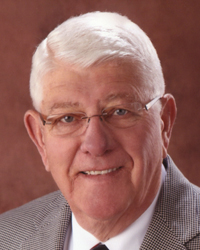 Turning down a professional baseball contract after high school, Ekwall attended the University of Nebraska, building on a basketball and baseball career that was forged in one of Nebraska’s smallest schools. A four-year starter in basketball who averaged more than 20 points per game each year at Holmesville, Ekwall earned Class D all-state honors three times and was an all-class all-state player as a senior when he averaged 28.3 points per game. He finished his high school career with 1,984 points. An outstanding pitcher and hitter in baseball, he played for Hays, Kan., Ban Johnson league before reporting to the Cornhuskers to play basketball and baseball. The Huskers’ leading scorer and rebounder in 1956 and 1957, he finished his career averaging a record 10.4 rebounds per game, a record that has stood for more than 50 years. He was inducted into the Nebraska Basketball Hall of Fame in 1992.