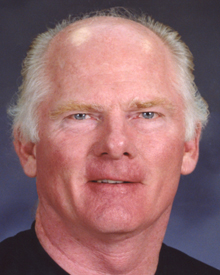 The first two chapters of Rich Olson’s coaching career in girls basketball included state championships at Millard South and Lincoln Northeast. In a 21-year stint at Millard South, he led his team to 15 state tournaments, including the championships in 1989, 1992 and 1996, as well as runner-up finishes in 1988 and 1993. He moved to Lincoln Northeast for the 2004-05 season and led the Rockets to an undefeated state championship. The Rockets were state runner-up the next year and qualified for the state touranment the following year. The loss in the state final in 2006 snapped a 48-game winning streak. At the time of his induction, he had ended his brief retirement, agreeing to take over the girls basketball program at Lincoln Lutheran, bringing to the post a 427-182 record.