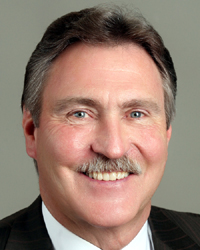 Athlete. Class of 1965. In whatever sport he tried, Rich Osentowski succeeded. He was a three-year starter at quarterback on the Ord football team earning all-state honorable mention. He started at guard on Ord’s state tournament qualifying basketball team, earning all-state and all-state tournament honors. He won the Class B golf championship, leading Ord to the team title in that sport. He also joined the track team for one year. Baseball is where Osentowski advanced the farthest, playing in the Minnesota Twins organization after a record-setting career at Kearney State College. The quarterback on Kearney State’s undefeated football team of 1967, he also led the Lopers to the NAIA National baseball tournament, setting single-season records with a .475 batting average and nine triples.