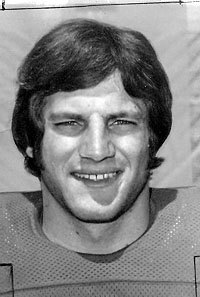 Athlete, 1971. The 1971 Fremont graduate picked up seven varsity letters in high school, two in football, three in basketball and two in track.  Football honors included All State twice and All Conference twice, 1969 to 1970, and in 1970 was selected High School American both academic and athletic. Football found him running, catching, kicking field goals and playing defense. In basketball, he was twice All State honorable mention and twice All Conference.  In track , won the All Class Gold Medal in the 400 yard dash with a time of 49.6 (pre metric) in the 1971 State Track Meet.  In 1971 he was selected as runner-up High School Athlete of the Year selected by both the Lincoln Journal Star and the Omaha World Herald.  University of Nebraska football, three letters.  He started as wingback in 1973 and moved to split end in the ’74 season and led the team in receiving yardage.  Selected Academic All Big 8 receiver in 1973. Drafted by the St Louis Cardinals in 1975, but due to a back injury couldn’t pass the physical.  Now a CPA, he lives and works in Lincoln.