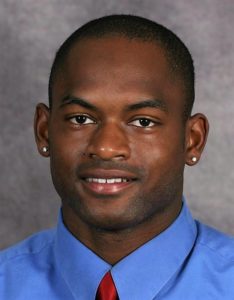 Robert Rands carved out a spot in Nebraska sports history by breaking Gale Sayer’s long jump record that had stood for 44 years.  But Rands was more than a one-jump wonder.  The State’s consensus Athlete of the Year in 2005, he was an outstanding football player who rushed for over 2,650 yards in his career and scored 30 rushing touchdowns.  On the track, he won three Class A long jump Gold Medals, and was the first Nebraskan to jump 25 feet. and was the National Young Men’s and Pan Am Junior long jump champion.  At Nebraska, Rands spent one season with the football team before concentrating on track, but a knee injury ended his career after top-five finishes in the Big 12 as a freshman and sophomore.