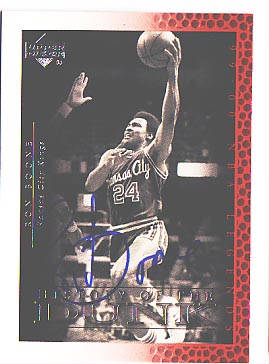 Athlete. 1963 graduate of Omaha Technical High School, his high school career, perhaps stymied because he didn’t begin to get basketball height until his senior year, served as a springboard to a professional basketball career. He came off the bench and had some good games on the high school varsity in 1963 when Tech won a state championship. He was a ball-hawk and a passer, more than a scorer, as a junior. By his senior year, he began to put up a lot of points and laurels started coming his way.  Western Iowa and Idaho State were his college choices. There he then became a outstanding scorer and was drafted by the American Basketball League.  Boone played in 1,041 consecutive games as a pro. 662 of those games were in the American Basketball Association. The NBA refuses to recognize statistics from the ABA, which sent four teams to the NBA in 1976, so his feat never became a record. He was the ABA’s third all-time leading scorer — behind Dan Issel and Louis Dampier — and a four-time all-star.  Played for Dallas Chaparrals, Texas Chaparrals, Utah Stars, Spirits of St. Louis, Kansas City Kings, Los Angeles Lakers and Utah Jazz.

Best moment as an athlete: “Any time you win a championship, it has to be your best personal moment. I did that in high school (1963) and with the Utah Stars in the ABA (1971).”

SALT LAKE CITY (Nov 18, 1997 – 16:59 EST) — Ron Boone never cared much for hoopla. He just played basketball, never missing a single game or even a practice during his entire college and pro career. “Nobody made a big deal out of it,” he said Tuesday. “I was just doing my job.”

Boone thinks players with Green’s work ethic are the exception rather than the rule in today’s NBA. “There’s no doubt that the approach toward the game has changed,” he said. “Money has a great deal to do with whether guys take a chance on playing or not.”

Boone said he never even considered missing a game. In his second year in the ABA, he separated a shoulder and played with his arm heavily strapped. Several years later with the Utah Stars, he had another shoulder separation during the playoffs. He was treated with acupuncture and came back the next night to score 25 points.

“I could barely move my arm across my body.” he said.

Boone says proper conditioning is the key to staying healthy.

“Throughout my playing years I tried to stay in good shape and avoid getting sick,” he said. “There’s some luck involved, but it was mostly preparation.”

Boone attended Idaho State and began his pro career as an eighth-round draft pick of the ABA’s Dallas Chaparrals in 1968. Three years later, he won the ABA championship with the Utah Stars, an accomplishment he considers even more important than the streak.

“That’s the ultimate in team sports, so I treasure the the championship,” Boone said. “But I think people remember me for the streak, and I can’t complain about that.”

What most fail to realize is that the 6-foot-2 guard enjoyed an exceptional career, averaging 18.4 points, five rebounds and four assists per game in eight ABA seasons and 13.9 points, 2.8 rebounds and 3.4 assists in his five NBA years. “When you talk about the ABA, the conversation always goes toward Julius Erving, George Gervin, Dan Issel,” Boone said. “That type of thing doesn’t bother me. I was always a low-key guy.”

Many recognize Omaha Tech’s 1963 basketball team as one of the greatest in Nebraska history.  However, few would have predicted that the undersized bundle of energy who came off the bench would be the one to go on to professional stardom.

Ron Boone, a 5-foot-8 junior on that 1963 Tech team, was often overshadowed by high school All-Americans Fred Hare and Joe Williams. But he learned the nuances of the game there, and with the help of a late growth spurt, went on to eventually become a four-time American Basketball Assocation all-star.

“I look back on the progress I made as a player, and it all started there at Tech,” he said.

Boone estimates he was 5-11 when he played one year at Iowa Western in Clarinda. By the time he made his debut with Idaho State he stood a full 6-2.

Boone developed into a scoring machine. He averaged a career-high 25.2 points in 1975 with the Utah Stars.

“I got taller and stronger and played more of a physical game,” he said.

He ranks third on the ABA career scoring list with 12,153 points, behind Louie Dampier and Dan Issel. He’s probably best known for his remarkable ABA-NBA record of 1,041 consecutive games. Twice he played with separated shoulders.

When he showed up in Pocatello, Idaho, in 1966 to continue his college career, pro basketball wasn’t even on the radar. By the time he finished his career under Claude Rutherford, it was.