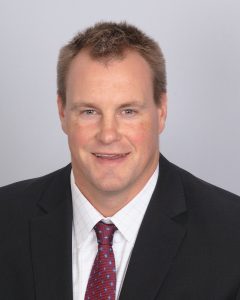 Russ Hochstein turned an all-around athletic career at Hartington Cedar Catholic into a football career that culminated in three Super Bowl Rings.  A BlueChip Illustrated football All-American as a senior, Hochstein was a 12-time letterman at Cedar Catholic, earning all-state honors for three years in football and basketball and broke the schools 23-year -old shot put record in track.  He came close to logging more that 100 tackles three years running and averaged a double-double on the basketball court (15 points, 10 rebounds) as a senior.  An all-class, all-state offensive lineman as a senior, Hochstein signed to play for the Nebraska Cornhuskers where he was a first-team All-American and a two-time first-team All-Big 12 selection.  In his 12-year NFL career, he became the second player to win a Super Bowl ring in three consecutive years.