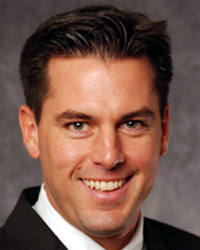 Class of 1989
Athlete
Scott Bream’s eight-year minor league baseball career had its moments but was limited by injuries. But nothing slowed the Millard South star in high school. He earned All-Metro honors at quarterback and all-state honors as a shortstop, and he started at point guard on Millard South’s undefeated state championship basketball team. The captain of the all-state baseball team his senior season, he hit .493 with eight home runs, 10 triples and 26 stolen bases. He had scholarship offers in football and baseball, eventually signing to play baseball for Creighton, but signed with the San Diego Padres after being selected in the second round of the baseball draft. Back surgery limited him to 32 games his first two years in the minors, but he recovered and reached the triple-A level before retiring in 1998.