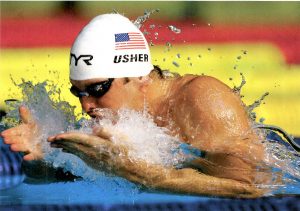 Grand Island (Class of 2001)
Scott Usher found his niche in the breaststroke, swimming his way to the 2004 Olympics. He won three gold medals at the state swimming meet his junior and senior years and graduated from Grand Island Senior High with school records in the 100- and 200-yard freestyle and the 200-yard individual medley. At the University of Wyoming, he was a five-time All-American and won six Mountain West Conference meet gold medals, setting the breaststroke records. At the Olympics in 2004, he qualified for the finals and finished seventh. He narrowly missed qualifying for the Olympics in 2008, finishing third at the Olympic Trials.