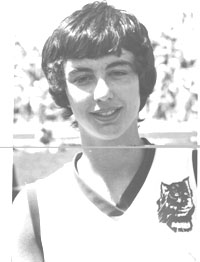 Athlete. On the cutting edge of resurgence for girls athletics in Nebraska high schools, Sondra (Obermeier) Herold became the very first girl’s high school athlete of the year selection in modern times. Her accomplishments in track & field during the year 1976 are particularly impressive. She leaped 19 feet five inches in the long jump, a record for over two decades. Three times she was the Class B state champion in the long jump, and overall gold medal champion twice in the long jump and once in the high jump. In 1976 she won four events in the Class B girls state track meet: 100 yard dash, 220 yard dash, the high jump and the long jump. In addition, she was an all-state volleyball player while in high school. Her presence was known from early on in high school.