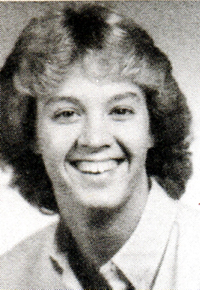 Athlete. Class of 1983. During the late 1970s and early 1980s, fortunate sports fans in Buffalo County could have seen one of the best young lady athletes to ever wear the royal blue and gold of Kearney Senior High School, Stacy Imming. She excelled in basketball, volleyball and track. Named Class A all-state twice in volleyball, she also scored over a thousand points playing basketball. Her lowest one game scoring effort her senior year was 17 and her high was 35. She scored over 20 points in 23 games that year. Even with all the scoring, she also is remembered for assists off her passing, including half-court bounce passes to feed fast breaks. In track & field, she did well, once having a shot put toss of nearly 41 feet and winning a silver medal at the state meet. At the University of Nebraska she lettered in basketball all four years, twice being named to the All Big Eight Conference Academic Team. She has been inducted into the Kearney Senior High School Hall of Fame.