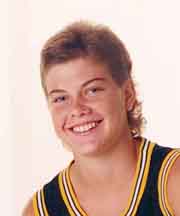 Athlete, Stephanie Thomas Clark played every sport she could.  The 1988 McCool Junction graduate collected honors enough for more than one person.  She was all-conference three years in volleyball and four years in basketball.  With her stats one would think that there should have been a re-count on the volleyball votes her freshman year.  However, she was all-state her sophomore through senior years in volleyball, being selected Class D-1 Honorary Captain those years.  She helped her team to the state championship in 1986.  In basketball she was all-state for three years, being selected the Class D-1 Honorary Captain for the two years she made the all-class all-state squad.   Steph had a career total of 1,743 points and was ranked third on the Nebraska all-time scoring list.  In track she set school records in the 100- and 400-meter dashes, the 100- and 300-meter hurdles, the long jump and high jump.  She set state meet records in the high jump and the 100-meter hurdles.  Her personal best of 5 feet 7 ½ inches in the high jump was, according to prep historian Jerry Mathers, just three and one-half inches above her head.  She earned an athletic scholarship to Creighton, but a back injury kept her from reaching full potential.  After graduating from college in 1993 she went to Angelo State University as a graduate assistant,  and then to the University of Illinois at Chicago as an assistant women’s basketball coach and recruiting coordinator.  In 1996 she started a three-year stint as the head women’s basketball coach at Odessa College in Texas.