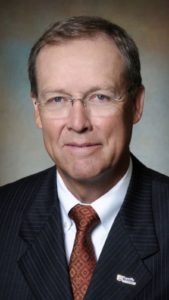 An All-Class All-State selection in football and basketball, Steve showed uncommon versatility- he shot left-handed in basketball and passed right-handed in football.  A four-year starter in both sports, he led the Laurel Bears to an undefeated season and the Class B “mythical” state Championship as a Senior.  In his four years as the starting quarterback, Laurel won 32 games and lost six.  In basketball, he was a solid defensive player and strong rebounder who earned All-Class All-state honors.  He finished his high school career with 1,427 points and a State record 1,321 rebounds.  At the University of Nebraska, he started 55 of 71 games in an era before freshmen could play varsity.  His senior year, he averaged 3.3 assists per game.