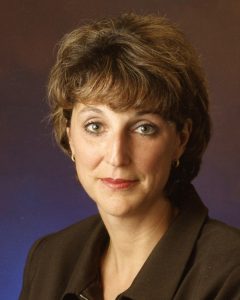 Athlete. The halls of Schuyler High School echoed for quite some time at the exploits of Sue Kobza, one of the best girl athletes at a time when women’s high school sports in Nebraska was undergoing a modern resurgence. A three-sport athlete at Schuyler Central, she lettered three years in both volleyball and basketball, but she claimed track as her true athletic love and followed in a family tradition by throwing the discus. Sue started early by setting discus records in youth competition while in junior high and won second place in the state high school meet her freshman year, her lowest state meet finish. She won the Class B discus throw her sophomore, junior and senior years at the state track meet, setting records each time. She carried her love for track into the Junior Olympics and was a national champion in her final year in 1977. A good student at the University of Nebraska, she lettered one year in basketball and three years in track & field.