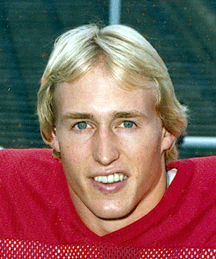 Athlete. Todd Brown, the first Nebraskan to eclipse the 50-foot mark in the triple jump, still holds the state record with a leap of 50 feet, 2 ¼ inches. In 1978, Brown set the triple jump record while winning three Class B championships at the state meet. He also won the long jump and 100-yard dash at the state meet. The previous year, Brown took home the gold in the Class B triple jump and placed second in the long jump. Brown also competed in football for the Holdrege Dusters and was selected to play in the 1978 Shrine Bowl. He competed in football and track at the University of Nebraska. In 1983, Brown was selected in the sixth round of the NFL draft by the Detroit Lions. He went on to play five years in the Canadian Football League for the Montreal Concordes, Saskatchewan Roughriders and Winnipeg Blue Bombers.