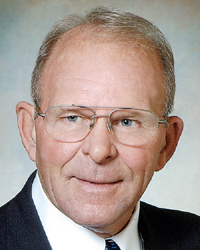 Athlete. Class of 1959. Determined, hard-working and athletically gifted, Tom Ernst contributed more than his share to Columbus High School’s athletic success. The 1959 Lincoln Journal Star athlete of the year, Ernst earned 11 letters, started for four years in football, set scoring standards in basketball and tied for the gold medal in the shot put at the state track meet. Yet, baseball may have been his best sport. Pitching for the Columbus American Legion team, he posted a 23-8 record, throwing nine no-hitters. On the football field, Ernst was a triple-threat halfback. His senior year he rushed for 989 yards and 13 touchdowns on 142 carries, and completed 33 of 65 passes for 680 yards and eight touchdowns. He also handled the kicking chores. In basketball, he finished his career with 680 points, at the time, second-best in Columbus history. He went on to start on the Nebraska Cornhusker baseball team for three years and played on the 1962 Husker football team that played in the Gotham Bowl.