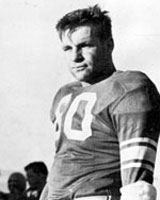 Athlete.
When sports fans talk about tough athletes, no one’s name stands above this 1944 graduate of Omaha South High School. He started out as a crushing fullback and a stop-them-in-their tracks defender and led South to #1 championship fame in the fall of 1942 as a junior. He reached all-state status his final two years of high school. During some dark days for NU football following World War II, Tom Novak was a bright spot, a force to be reckoned with all by himself, playing center on offense and linebacker on defense from 1946 to 1949. His nickname of “Train Wreck” properly explains the high regard all opponents had for his powerful playing style. This was a truly fearless football player.

The university now has an annual player award in his name. His number was retired.