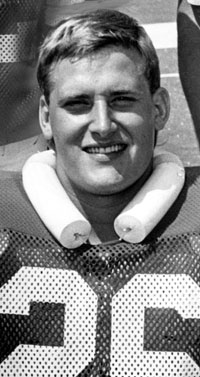 Athlete–A 1980 graduate of Grand Island High School, this versatile athlete surprised many at the state track meets by being an excellent high jumper, posting a top personal best of 6’7“ and winning a gold medal as a junior. A running power on the gridiron both in high school and college, he developed into a great fullback at the University of Nebraska (he enjoyed a rare 84-yard touchdown run against Colorado his senior year). During a decade of professional football, he earned two Super Bowl rings with the San Francisco 49ers as a runner-blocker-pass catcher for Joe Montana, et al, reaching all-pro status.  An NFL player from 1986-94, Rathman helped the 49ers capture two World Championships (Super Bowl XXIII and XXIV) and seven NFC West titles. He totaled 4,392 yards from scrimmage and scored 34 touchdowns while playing in 113 games with San Francisco. He played his final season in the NFL with the Los Angeles Raiders in 1994.