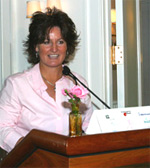 A legend in Nebraska women’s golf, this 1978 graduate of North Platte High School earned an individual medal at the very first Nebraska high school girls golf state championship. She followed that with a win in the state amateur tournament, then attended college at Oklahoma State, and eventually proceeded into the ranks of professional golf. She gradually worked into expert analyst roles for golf media.

She began playing golf at the age of 4, after mimicking her father, who was a head golf professional at a golf course. As a junior golfer, Val won two state championships and 20 high school titles as well as some national competitions. This success earned her a golf scholarship at Oklahoma State University, where she gained more athletic achievements, including being named the Big Eight Female Athlete of the Year, GOLF Magazine’s Collegiate Player of the Year and becoming the National Collegiate Scoring Average Leader.

After college, she qualified for the LPGA Tour, won six tournaments and competed on the pro tour for 20 years. She also was a member of the victorious U.S. Solheim Cup team in 1996 is a member of three golf halls of fame.