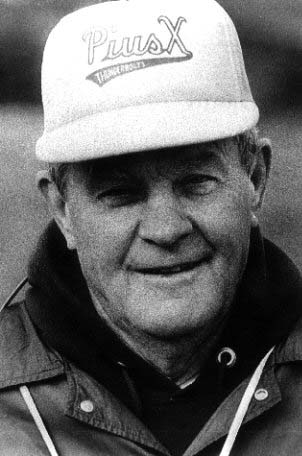 Coach. A coaching legend in Nebraska high school football, this gentleman started his illustrious career at Cathedral High School in Lincoln in 1950. Interestingly, in those days Cathedral High played 6-man football. In 1951, under the guidance of Coach Aldrich, the school was  the No. 1 6-man team in the state. In the fall of 1956, Pius X High School opened in Lincoln.  Aldrich was on the faculty as both a football expert and a fine teacher. In both 1975 and 1978, his Thunderbolts won the state playoffs and were the undisputed Class B state champion. A common compliment to this winning coach in those days was the statement that the Pius X team under Coach Aldrich’s direction could compete with any Class A team. With a lifetime football coaching record of 200-105-13; it is no surprise that today the football field at 6000 A Street in Lincoln is named Aldrich Field.