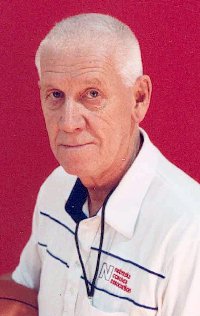 Coach. Wes’s basketball record with a career span of 48 years:  519 wins and 168 losses.  This includes one state championship and ten district titles plus numerous conference titles.  The administrator-coach also coached football, track, baseball and volleyball at the junior through college level during his career.  His Nebraska basketball teams reached the state tournament four times: Weston in 1956, Elmwood in 1985 and Lincoln Christian in 1991 and 1993, winning it in 1991.  Other career high lights include coaching a college All Star team in Europe, coaching a professional team in China in 1982, Assistant Coach on the Nebraska Coaches All Star Team in 1991 and coaching one of Valentino’s All Star teams in 1991.  Though officially retired from teaching,  Wes still serves as activity bus driver, substitute teacher and FCA sponsor.  He plans to continue coaching and working with young people.  He runs summer camps for children in kindergarten and up stressing basketball fundamentals and principled of integrity.  Previous honors received by Wes are the Mike Heck memorial award and the Ralph Beechner Coach of the Year Award. Volunteered with the basketball program of the Cornhusker State Games.