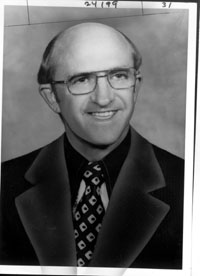 Athlete. Mention the name Bill Mountford of Red Cloud to anyone active as a high school track & field athlete in Nebraska after World War II and before the Korean War and the retort would be: “Ah, yes – the great race.” Perhaps the most famous high school race ever run over the red cinders of Memorial Stadium in Lincoln took place on May 17, 1947, between Red Cloud Class C High School senior William E. Mountford and the defending gold medal winner, Marvin Zimmerman of Class A Nebraska City High School. Mountford lost the first race he ran in high school and none thereafter, dominating the mile run in Class C for three years. The boys on the track team at Red Cloud had to agree to compete in Class A in 1947 year so Bill could compete with Marvin at the state track meet. After dueling stride for stride for four quarters, Mountford held off the Zimmerman challenge by an eyelash in the then record mile time of 4.26.2. Generation after generation of runners recognized this effort as one of the most significant accomplishments in high school sports. The record stood for 17 years and it is a tribute to the sportsmanship of both runners that the race could take place at all. Forever it will bear the name given by the late Gregg McBride of the Omaha World-Herald: “The Magic Mile”.