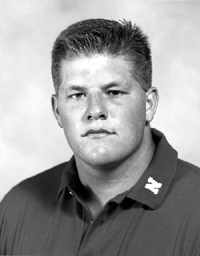 Athlete, Class of 1990. The Outland Trophy as college football’s best lineman and a 12-year NFL career grew from Fremont Bergan’s high school athletics for Zach Wiegert. Playing both offense and defense, Wiegert earned all-state football honors at Bergan his senior year despite missing the first six games because of illness. He logged 67 tackles in five games. He also was an all-conference forward in basketball and a weight thrower in track. He made 61 percent of his field goals in basketball, setting a school record. Once he concentrated on football, he dominated. An anchor of the Nebraska Cornhuskers’offensive “Pipeline,” he started 46 games and allowed only one sack. He was an all-conference selection three times and an All-American in 1994, the year he won the Outland Trophy and paved the way for a national championship for the Huskers. He finished ninth in the Heisman Trophy balloting and was drafted in the second round of the NFL draft by the St. Louis Rams. He also played for the Jacksonville Jaguars and Houston Texans.