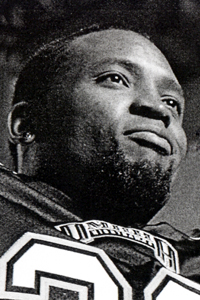 Athlete. Class of 1995. Mixing speed and power, Ahman Green left a multitude of tacklers in his wake during a stellar career at running back in high school, college and the NFL. He started his high school career at Omaha North, enjoying a 1,000-yard season before becoming an all-stater at Omaha Central playing running back, linebacker and punter. He earned all-state running back honors in 1993 and 1994 and won the 100 and 200 meters at the 1995 state track meet. He rushed for nearly 4,000  yards at Nebraska and more than 9,000 yards in the NFL, mostly at Green Bay, where he became the Packers’ all-time rushing leader. The Big 8 Freshman of the Year, he rushed for 1,086 yards and 13 touchdowns as Nebraska won the 1995 national championship. A four-time Pro Bowl selection, Green finished his NFL career with more than 11,000 yards.