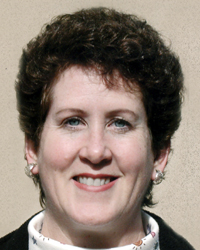 Athlete.  Class of 1977.  Barb Harris ruled the pool in her high school years, never losing a race. She completed her high school career with six individual state meet gold medals. A school rule barred her from competition as a freshman, but she made up for it as an upperclassman with dominating performances, including a national record in the 100 freestyle in 1976 in the first state meet held at the Bob Devaney Sports Center. As a senior, she set state records in the 200 freestyle and 100 butterfly. She went on to win an NCAA championship in the 50-meter butterfly while swimming for the University of North Carolina, where she earned All-American honors numerous times, qualified for two Olympic Trials, won a gold medal at the World University Games and anchored an American record-setting medley relay.