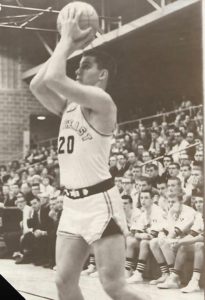 The year was 1964, and Lincoln Northeast traveled to South Sioux City in snowy, blizzard conditions.  The Rockets’ bus even went off the road in route.  Little did the state know that night, a senior from LNE would break a Class A State Record that still exists going on 50+ years.  Ed Johnson’s team found itself in a dogfight with the home team Cardinals, but a Senior guard, Jerry Motz, put on an offensive exhibition that propelled them to a 90-75 weir.  Motz started the game 0-4 from the field, but hit his next 23 shots of the game and was 11 for 16 from the foul line, setting the Class A record.  This is still a record at Lincoln Northeast.  The next week against Lincoln High, he made his first 9 field goals, netting 32 consecutive shots.