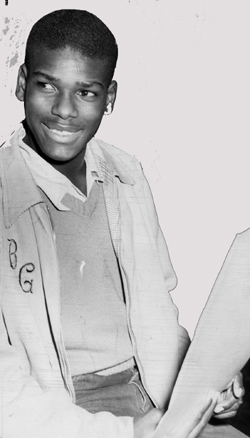 Athlete–Considered one of the toughest major league baseball pitchers of all time, his athletic prowess was first noticed as a basketball player while at Omaha Technical High School, from which he graduated in 1953. For a time thereafter he followed the lure of basketball, playing for Creighton University in Omaha, then in the highly respected college all-star game,  and for a time on the road with the Harlem Globetrotters. But after joining the St. Louis baseball team Bob Gibson definitely got serious about the game of baseball, leading them as a great pitcher to three pennants and two World Series championships. His best year may have been 1968 when he had 22 wins against 9 losses and had a record-breaking ERA of 1.12 for that season. He had a 1.89 ERA in World Series play and holds the major league record for lowest ERA in a season (1968). He was elected to the Baseball Hall of Fame in 1981.