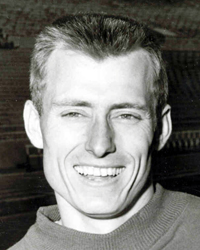 Athlete. Class of 1944. For two hours, Don “Moose” Cooper was the best pole vaulter in the history of college athletics. On April 21, 1951, Cooper cleared 15 feet, 1/8 inch at the Kansas Relays – the first collegian and fourth person ever to clear 15 feet. Later that day, Don Lax of Illinois went 15-1 ¾ in a meet at Los Angeles. Cooper had been an outstanding pole vaulter throughout his career, using bamboo and steel poles and landing in dirt and sawdust pits. He was a two-time Nebraska high school all-class gold medalist, a three-time winner at the Drake Relays. At York High School, he also lettered in football and basketball and was the starting guard on York’s state championship basketball team of 1944. He was named to the all-state tournament and all-state teams of 1944.