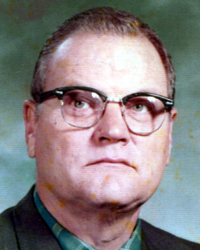 Athlete. Class of 1938. Considered one of the most versatile high school athletes in the state, Herb Grote was named to the Omaha World-Herald Honor Roll teams in football, basketball and track and was named to the Nebraska All-Legion baseball team. But he had no peer when throwing the javelin, a skill he acquired while throwing sunflower stalks in the back yard.. He won the state high school gold medal in 1937 and 1938, setting the state record as a junior. At the University of Nebraska, he won the Big Six javelin championships in 1940, 1941, 1946 and 1947. An All-American in 1940 and 1946, he won the “triple crown” in 1947 by winning the javelin at the Texas Relays, Kansas Relays and Drake Relays. While in the infantry in World War II, he rose from private to captain and was awarded the Purple Heart and Bronze Star.