Record: 8-0-1. The Junior Jays won 28 straight before playing to a 7-7 tie with Boys Town in the season finale. The team — led by all-staters Frank Zitka, Robert Springer and Leo Von Tersch and first-year coach Don Leahy – was named the state champion after completing its third season without a loss.

The 1949-50 Omaha Tech school annual staff tried its best to review the football season and make it sound interesting. “It would be virtually impossible to pick out the one outstanding game of the season,” editors concluded. “Every one was thrill-packed.”

Well. To put it a few other ways, every game also was a romp… a flat-out walkaway… a good thumping… a very long night for the opposition. Victories all for the Tech High squad anywhere from 13 points to 46. Coach Ken Kennedy’s team had six shutouts and gave up only two touchdowns in an 8-0 season that was aptly rewarded at the end with the state championship.

This team was behind just once all season long, briefly in the Benson game when Benson scored the first touchdown. Tech won the Missouri Valley championship, the Intercity Conference championship as well as the state title.

“The impressive way the Maroons marched through an undefeated campaign is all happy history for Tech rooters,” wrote The World-Herald’s Don Lee. “They’ll have a right to crow about the Blitz of “49 for as long as they wish.”

Ray Novak, Ralph Brown, Mike Cottrell, Jerry Lawson, Leonard Singer and George Sader all made all-conference, which gives us an idea on how dominating this team was in a strong conference. Brown, Singer and Novak were all-state. Novak was inducted into the Hall of Fame as a pioneer athlete on the same day this team was honored as a golden anniversary team.

Unbeaten, untied, five shutouts and a 27-21 victory over Omaha Creighton Prep in the high school game of the year. Those were the Swedes of Gothenburg and Coach Dutch Zorn in 1945, the winner of the Hall of Fame’s first Golden Anniversary Team Award, announced at the 1995 Hall of Fame banquet.

The key win was in Omaha on Nov. 10 against No. 1 rated Prep. The game was a during-the-year arranged contest between outstanding teams, a regular occurrence in the years prior to the football playoffs. A crowd estimated by a World-Herald writer at 2,000 watched the Swedes jump to a 20-7 lead that, despite a rousing comeback at the end, Prep was not able to overcome. 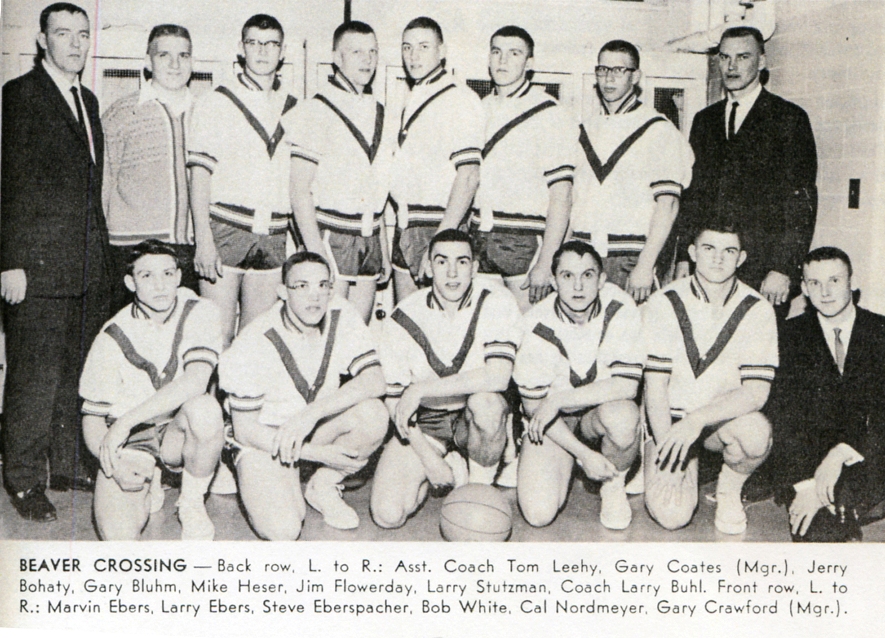 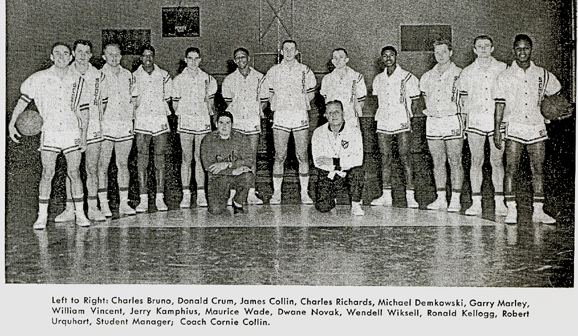 The 1960 Class A state championship basketball was the only unbeaten Class A team for the next 29 years. They won every laurel available that season–city champions, district champions, state tournament. Team selected in 2000 for the South High Hall of Fame.

That’s what coach Cornie Collin had drilled into his talented bunch of Omaha South High School basketball players for four years, ever since he foresaw a future state championship trophy in their skinny freshman arms in South’s old third-floor gymnasium.

And that’s what he told them again, with a game, their perfect season and the 1960 Class A state tournament on the line.

South was tied 56-56 with Alliance High School. Fewer than 10 seconds remained in the semifinal game. An NU Coliseum crowd of 10,000-plus was going nuts watching the western Nebraska kids challenge the Omaha city boys.

It was only the second time in 20 games that the South team had been challenged until the last minute.

That meant get the ball inside. Feed it to 6-foot-8½ center Bill Vincent to either take a shot, hit a cutting guard or pass outside to smooth-shooting Wendell Wiksell.

Guard Chuck Bruno drove into the free-throw lane. He dished off to his right to Vincent, who waited outside the paint. Five seconds to go. The big man spun to his left. Vincent released a sky hook, a shot he had perfected under Collin’s relentless tutelage while Kareem Abdul-Jabbar was still in grade school.

South went on to defeat Lincoln Southeast in the finals. They not only won the 1960 title that coach Collin had envisioned in 1956. The kids in white Converse high tops and high-and-tight crew cuts also completed an undefeated season. Their fete was not repeated in Nebraska Class A boys high school basketball until Millard South won them all in 1988-89. By then, Chuck Taylors had become retro wear for artsy kids, and Abdul-Jabbar was about to retire from the NBA.

The Nebraska High School Sports Hall of Fame will pay tribute to that South High team today at its annual awards program in Lincoln. The Hall of Fame will induct 11 athletes, five coaches, two contributors and a referee. It also will honor South’s 1959-60 basketball team and Central City’s 1960 baseball team on the golden anniversary of their glory days.

“I’ve seen all the best Class A basketball teams since 1957, and I put that South High team No. 1,” said Omahan Bob Witte, a self-proclaimed basketball junkie and a former Omaha North High School coach.

Witte admits he might be biased. That was his era. He played for Benson High against South in their perfect season. He said there are some challengers, including Fred Hare’s Tech High team in the early ’60s, Millard South in 1988-89, and Lincoln High’s undefeated 1957-58 squad.

But for Witte’s money, none compares to South’s combination of talent, skill, chemistry and Collin-coaching in 1959-60.

Last week, each of five players from the team mentioned chemistry when asked to reminisce.

“We were a team with a capital T,” Bruno said.

Collin, whose South basketball teams had won state titles in 1937 and 1944, began building that team when Bruno was a freshman.

A group that became known as “The Mythical Five” formed the core.

Vincent was a classic center who went on to play for NU. Jim Collin, the coach’s kid, ran the offense and played rugged defense. Jerry Kamphuis put the power in power forward with a fierce pursuit of rebounds and dunks that could — and sometimes did — bend rims. Wiksell was a deadly jump-shooter from what is now 3-point range. And Bruno was a lightning-quick little guy who could shoot and steal.

Dwayne Novak joined the team for the state tournament after William Wade had an appendicitis attack, Maurice Wade said. Another player, Paul Josoff, left during the year.

How strong was the bench? Despite losing five senior starters, the 1960-61 South team won all but three games.

When the Mythical Five were freshmen, Coach Collin put his son and Vincent on the varsity. He told them to learn from the best players in the city, Jim Collin said. Meanwhile, the coach worked them out for three hours a day in practice. He made Vincent shoot hundreds of hook shots in a work out, from the right, from the left, move further out, repeat.

As sophomores on the varsity, the Mythical Five won only three or four games all year. As juniors, they nearly won state, losing to the undefeated Lincoln High team.

They sought out the best competition, Maurice Wade said. They went to north Omaha to play pick-up games at Kountze Park (where Wade said Wiksell learned his jumpshot) and the YMCA. They took on Offutt Air Force Base teams of former collegians.

They went out together for pizza at the old Caniglia’s Restaurant, Seventh and Pierce Streets.

Like most of South’s nearly 3,000 students, most of the ballplayers came from working class families. Their parents were custodians and domestic workers, meatpackers and Western Electric factory laborers.

Race occasionally came up on the team, but Coach Collin snuffed out any tension before it became a problem, Maurice Wade said.

“He said we’re here to play basketball, not for that hokey-pokey,” Wade said.

By 1959, the team was an experienced unit. Rose, who came up to varsity mid-season, said everybody knew his role and accepted it.

The first big challenge came early in the year against Omaha Central, led by the legendary Johnny Nared. South won by two.

They had a couple other close contests, but won by working the plays. Vincent was the star, averaging 22 points. Kamphuis averaged 12, Wiksell 11 and Bruno and Collin a combined 15.

The bench picked them up when the Mythical Five struggled or fouled out.

“Everybody contributed for us to have that wonderful season,” Maurice Wade said.

The guys who remain are in their mid-60s. For them, the glow of 1959-60 has never gone away completely. Bruno, a retired Omaha firefighter, has buoyed alumni spirits with the stories through leaner South sports years. Rose, a retired custodian and factory worker, regaled fellow soldiers with basketball tales in the jungle of Vietnam. Jim Collin, now retired in Arkansas, went on to teach and coach kids for 30 years. Wiksell, a retired teacher who lives in California, said the joy of the perfect season has lasted his whole life.

“It was such a positive thing,” he said. “It left such a good taste in your mouth. It makes you feel good, still.”