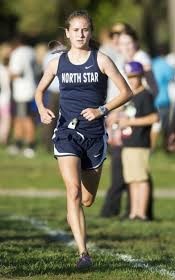 Jeralyn is the second runner in Nebraska history to win four all-class gold medals at the State Cross Country meet.  She set the state 5000-meter cross country record (18.09) and was named the Nebraska Gatorade Runner of the Year in 2011, 2012, 2013, and 2014.  She attends Michigan State, majoring in Earth Science/Meterology. She is a member of the Spartan cross country and track and field teams.